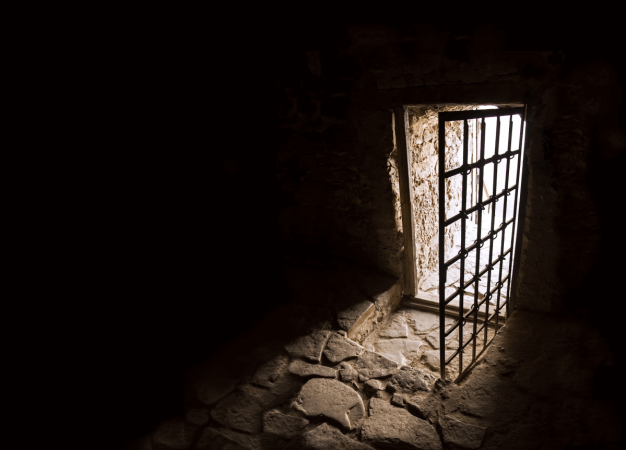 by The Reverend Jeffrey C. Johnson

16 One day, as we were going to the place of prayer, we met a slave-girl who had a spirit of divination and brought her owners a great deal of money by fortune-telling. 17 While she followed Paul and us, she would cry out, “These men are slaves of the Most High God, who proclaim to you a way of salvation.” 18 She kept doing this for many days. But Paul, very much annoyed, turned and said to the spirit, “I order you in the name of Jesus Christ to come out of her.” And it came out that very hour. 19 But when her owners saw that their hope of making money was gone, they seized Paul and Silas and dragged them into the marketplace before the authorities. 20 When they had brought them before the magistrates, they said, “These men are disturbing our city; they are Jews 21 and are advocating customs that are not lawful for us as Romans to adopt or observe.” 22 The crowd joined in attacking them, and the magistrates had them stripped of their clothing and ordered them to be beaten with rods. 23 After they had given them a severe flogging, they threw them into prison and ordered the jailer to keep them securely. 24 Following these instructions, he put them in the innermost cell and fastened their feet in the stocks. 25 About midnight Paul and Silas were praying and singing hymns to God, and the prisoners were listening to them. 26 Suddenly there was an earthquake, so violent that the foundations of the prison were shaken; and immediately all the doors were opened and everyone’s chains were unfastened. 27 When the jailer woke up and saw the prison doors wide open, he drew his sword and was about to kill himself, since he supposed that the prisoners had escaped. 28 But Paul shouted in a loud voice, “Do not harm yourself, for we are all here.” 29 The jailer called for lights, and rushing in, he fell down trembling before Paul and Silas. 30 Then he brought them outside and said, “Sirs, what must I do to be saved?” 31 They answered, “Believe on the Lord Jesus, and you will be saved, you and your household.” 32 They spoke the word of the Lord to him and to all who were in his house. 33 At the same hour of the night, he took them and washed their wounds; then he and his entire family were baptized without delay. 34 He brought them up into the house and set food before them; and he and his entire household rejoiced that he had become a believer in God.

Scripture quotations are from the New Revised Standard Version Bible, copyright 1989, Division of Christian Education of the National Council of the Churches of Christ in the United States of America. Used by permission. All rights reserved.

In our continuing journey through the Book of Acts of the Apostles, we come across a story that is one of my favorite of all biblical stories…the story of Paul and Silas in prison.  I like it because it would make a good Disney animated feature.  It’s sort of like a fairy tale with some magical aspects as well as some real Vegas styled drama.

Let’s set the scene.  Paul and Silas are out evangelizing which is what the Early Church, the newly formed Church, is called to do.  Go out!  They are out and about in Phillipi that city in Macedonian region where we encountered Lydia, the purveyor of purple cloth last week.  Obviously, Paul and Silas have worn their welcome out with Lydia or so we think and now they’re out in the city streets again with an encounter with an entirely different female…a slave girl possessed by a demon who practices divination and tells fortunes.

I don’t want to focus on the not-so-nice activities that the slave girl participates in but really on the fact that she indeed, is a slave.  She is owned by two unscrupulous men who exploit her not only for things mentioned here in the Acts passage but for who knows what.  They own her.  She is property and they can do whatever they wish with their property.  Do not focus on her uncontrollable activity, but the fact that she is a slave owned by some pretty evil men.

The slave girl practices all sorts of things we still see today:  fortune telling and divination.  In fact, you can have your fortune told on Belmont Street near the Route 24 exit.  The other thing she practices is divination.  Divination is communicating with the dead in order to have answers for the future.  Some modern language around this would be, for instance, a seance.  However, most importantly, she is possessed by an evil spirit, a demon.

But like all demon possessed creatures in the gospels, the demons know who Jesus is OR Jesus’ followers, hence Silas writes: “These men are slaves of the Most High God, who proclaim to you a way of salvation.”  Once again, the slave girl’s demonic possession knows that Paul and Silas are slaves of the Most High God.  She’s actually doing them a favor by calling them out.

However, Paul is annoyed.  Here I can sympathize will Paul.  Who wants a rabid person screaming at you in the streets even though what they say is true?  It’s a bizarre form of persecution?  So, in his anger and annoyance, Paul casts the demon out.  From them on we know nothing of the slave girl.  However, the exorcism of the slave girl disables her ability to communicate with the dead and tell fortunes.  The slave owners have lost their meal ticket.

I cannot help but think about what the slave girl was liberated from.  Not only was she freed from her earthly captors, but from evil powers that are counter to the Resurrection of Our Lord and the very notions of rebirth and new life.  I cannot help think of our Easter Gospel found in Luke we heard in April.  When the grieving women approach Jesus’ tomb to anoint his body, they find two men dressed in white.  The men dressed in white say to the grieving and confused women: “Why do you seek the living among the dead?”  Why does the slave girl seek the living among the dead?  And furthermore, why does anyone seek the living among the dead.  In following Jesus, we are always looking for where God is leading us while being rooted in from where God has brought us.  The children of Israel only wandered in the desert for forty years only to have God bring them to the promised land of Canaan.  God calls us to move forward baby-step by baby-step.  God calls First Lutheran to move forward baby-step by baby-step.

But back to Paul in jail: Furious, the slaveowners drag Paul and Silas before the Roman officials and demand law and order.  Paul and Silas are beaten mercilessly and thrown in jail.  Remember that the city of Phillipi is a Greek town controlled by the Roman Empire.  The Roman Empire practiced a way of thinking and governmental practice called the Pax Romani…or the Peace of Rome.  However, I remind you that the peace that Roman offered is not the peace Jesus offers or leaves his disciples.  In order to have peace in ancient Rome, you have treacherous Roman officials who torture, execute anyone and everyone who gets in their way.  It’s kinda like the Empire in Star Wars. Law and Order is maintained by Force.

In the need to maintain “peace” Paul and Silas are thrown in jail for preaching sedition against the Roman Empire.  But my friends, no jail holds them.  As the story unfolds like a Disney fairytale, around midnight after a night of prayer and hymns their chains break and the prisons doors open as if by an earthquake.  Just see this in your mind.  But Paul, a Roman citizen, calls out to his jailer, “we are still here.”  Don’t you find that a little ironic?

The unnamed jailer, realizing the power of the most High God illustrated through Paul and Silas attempts suicide, but Paul and Silas save him.  Later he is baptized as well as his household.  Just like Lydia and her household but with a very different story.

This story has such takeaways.  I would say that it really entails the notion of slavery vs. freedom and law and order versus justice and mercy.

Note the people in this story who are released from bondage both physically or spiritually: The slave girl, Paul and Silas, the entire prison house full of prisoners, the jailer, and even the jailer’s household.  The prison chains and the prison doors open for everyone NOT just Paul and Silas.  There is no differentiation of freedom among those set free.  Freedom is not just for our good guys, Paul and Silas, but everyone.  Justice and mercy are for everyone.  And merciless law and order do not necessarily maintain peace.  I think the jailer is the prime example of that.

The slave girl, the most interesting for me in the entire narrative, is free from her captors and free from spiritual evil.  What would her story be the day after she is set free?  Does she follow Jesus?  What does freedom look like for her?

What do our chains falling off our bodies look like?  What does spiritual and emotional healing look like for the slave girl? For the recovering addict?  For those of us trapped in fear?

Jesus was in that prison with Paul and Silas as evidenced by their praying and singing.  Jesus was there when they were nearly flogged to death.  Jesus releases Paul and Silas, the jailer, the jailer’s household to be his feet in the world.

1500 years later Martin Luther proclaims the same freedom to a small university town in Germany.  Throughout history, we have seen many liberations from small private ones to something as monumental as the D-Day invasion of which we commemorate the 75th anniversary this Thursday to the Holocaust Liberations during 1945.

Jesus has proclaimed here and throughout the world that our prison doors are burst open and the chains are off our hands and feet.  Let’s get up and get to work in a world that needs God’s love.